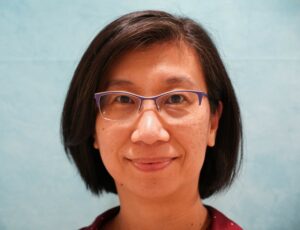 One of the most unexpected food for microbes is carbon-rich gas. Even though plants and algae get their carbon by fixing carbon dioxide (literally out of thin air), microbial fermentation is built around feedstock full of complex carbohydrates.

LanzaTech, a company founded in New Zealand and based in Illinois, USA, decided to challenge this conventional wisdom. By recycling carbon from industrial off-gases; syngas generated from any biomass resource and reformed biogas, LanzaTech can reduce emissions and make new products for a circular carbon economy.

One of the scientists behind LanzaTech’s progress in the field is Ching Leang. Originally from Taiwan, Ching Leang obtained her PhD in Molecular Microbiology at University of Birmingham, Birmingham, UK. She then moved to Derek Lovley’s lab in University of Massachusetts Amherst, where she implemented a genetic system for the strict anaerobe, G. sulfurreducen, and identified key proteins involved in extracellular electron transfers and for current production via microbial fuel cells.

In 2013, she joined the Synthetic Biology team at LanzaTech and focuses her efforts on genetic tools development, metabolic and strain engineering using the acetogen, Clostridium autoethanogenum as the model microorganism. She currently leads a cross-functional team scientists to bring next generation of CarbonSmart chemicals from laboratory to commercial production scale.

SINERGY has the pleasure to welcome Chin Leang for a webinar on 8 April. The event details and registration information can be found here.

Of course, I couldn’t miss the opportunity to ask Ching Leang a few questions on LanzaTech’s approach to research and innovation, which resulted to the interview below.

As gas fermentation was a new concept and a new process couple decades ago, we had to design everything from scratch, such as engineering, modelling, synthetic biology, and even supply chains.  There was also no existing infrastructure to build on, like feedstock supply chains for conventional biofuels. Applying gas fermentation to industrial gases means bringing a biological process right into a manufacturing setting, like a steel mill, because the gas feedstock can’t be transported.

On top of that, we had to develop genetic tools from scratch as acetogens were considered genetically intractable and not many tools were available a decade ago.

The LanzaTech process (CarbonSmart platform) offers flexibility in choices of feedstocks and chemical production.  We have demonstrated that we can use gases such as waste gases from industrial processes, gas derived from municipal solid waste, agricultural wastes as well as CO2 directly from air in combination with green hydrogen as the choice of feedstock for gas fermentation. 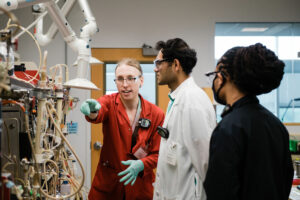 As just published in Nature Biotechnology, we now can produce acetone or isopropanol at scale in addition of ethanol (Ethanol plant commercialized in 2018).  The idea is to have the same reactor to run gas fermentation but switch out the microbe for the production of different chemicals in response to market price fluctuations.

Acetone and IPA are next in line for new chemicals. We also have several collaborations with companies across the globe using LanzaTech ethanol as a platform chemical/precursor for raw materials, such as those used in clothing, water bottles, and surfactants in detergents.  We also converted ethanol that produced from waste gases to jet fuel and this jet fuel has been qualified for flying. We did a demonstration, cross-Atlantic flight (Orlando, Florida to London Gatwick) back in 2018 using the carbon recycled jet fuel.

It is definitely not a linear process. We actually work very closely as an interdisciplinary team when developing a new strain. Regular meetings are held with cross functional teams to discuss progress/feedback/solutions.  All steps are equally important in my view and each stage has different challenges to overcome. 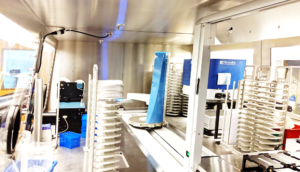 You work closely with several research institutes and universities. What are the advantages of working with academic labs? Are there any challenges?

We believe that the more labs and scientists are interested in and working on different aspects of gas fermentation, the higher are the chances for the process to be widely applied and be more successful.   There are many advantages working with academic labs, such as the wealth of talent, and expertise that we could tap into.  For example, the collaboration with Professor Mike Jewett at Northwestern University is really fruitful and the cell-free system helped us reduce the development time by months.

If I had to point any challenge, I would say that because of the nature of our business (licensing our technology), we are not necessarily able to share all knowledge related to gas fermentation with our collaborators.  It requires a lot of diligence and discipline during communication with collaborators in order to safeguard our IP.

All images are courtesy of LanzaTech