CREDENTIALS OF PSEUDOMONAS PUTIDA AS A REAL (NOT METAPHORIC) CELL FACTORY 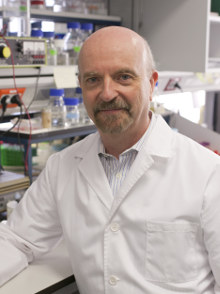 CREDENTIALS OF PSEUDOMONAS PUTIDA AS A REAL (NOT METAPHORIC) CELL FACTORY

Although bacterial cytoplasm is not compartmentalized this does not mean that cellular components are randomly organized or free to diffuse. Many studies have shown that proteins are located at particular regions of bacterial cells. We have investigated the subcellular localization of the molecular machineries that run the whole gene expression flow of Pseudomonas putida. Based on fluorescent protein fusions to subunits of RNA polymerase (RNAP) and ribosomes, microscopy and image analysis showed RNAP co-localized in 3D with chromosomal DNA, while ribosomal proteins were only abundant outside of the nucleoid. We have developed a genetic approach for exploring the intracellular micro-granularity of P. putida’s cytoplasm based on the Pm promoter and its regulator XylS by following the expression noise of Pm-gfp fusions in single cells. Using mathematical modelling and computational simulations, we determined the kinetic properties of the system and used them as a baseline code to interpret promoter activity in terms of upstream regulator variability. Transcriptional noise was predicted to depend on the intracellular physical distance between regulator source (where XylS is produced) and the target promoter which can be modified by obstacles in the way. This approach allowed deconvolution of cytometry data into mechanistic information on gene expression flow and provided a basis for selecting a given noise level in engineered regulatory nodes, such as in synthetic biology constructs. It is thus possible that the macromolecules involved in the flow of genetic information have a fixed 3D distribution in P. putida in order to optimize the catabolic ability of the corresponding enzymes. New approaches to examine the potential of P. putida as chemical microfactories will be discussed.

Victor de Lorenzo heads the Laboratory of Environmental Molecular Microbiology at the National Center for Biotechnology, Spain. He specializes in Molecular Biology and Biotechnology of soil bacteria (particularly Pseudomonas putida) as agents for the decontamination of sites damaged by industrial waste. In 2001 this work received the National Award King James I for Environmental Protection. He is the recipient of the GSK International Award of the American Society for Microbiology, and the Grand Prix of the French Academy of Sciences, and has co-chaired the EC President’s Science and Technology Council. His current work maps at the interface of Synthetic Biology with Environmental Biotechnology.